Have you tried Coate’s shaving cream?

Have you tried Coate’s shaving cream? 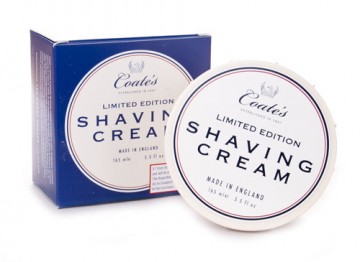 One hundred great shaves’ from a jar of Coate’s

Given the fact that I am responsible for the entire shaving side of the business, from the shaving services right down to the shaving products we retail, I am fortunate enough to benefit (and sometimes disadvantaged) in having to try out of all the products we buy in, beforehand.

Well, I am writing this post to introduce you to Coate’s Limited Edition Shaving Cream, a product we have only been stocking for a and one I have become rather fond of for the following reasons.

Unlike some shaving creams, Coates shaving cream only requires a very small turn of the brush in order to build up a rich lather. As for the lather itself, I can only describe it as being rich and even in consistency and that it delivers a well coated face of cream. It holds well for the duration that it’s on your face by not drying out, unlike some other creams I have used in the past. The consistency of the shaving cream I can only describe as being similar to that of decent whipped cream. It gives good coverage with only a small application of the brush, it covers evenly and so with a cream like this, it also protects the face well against the razor.

The cream comes in a similar jar to that of Taylors, but it is also packaged in a really smart box, whose inner lining is ‘regency striped’.  I know what you are thinking – the packaging doesn’t assist in removing that stubborn growth! However, I am someone who appreciates the finer looking things in life and I’m particularly in favour of a good product that is also well packaged. It’s important. Also, every £1.00 from the sale of this product gets donated to the Royal British Legion, so this company is definitely trying hard to keep the brand wholly and quintessentially British. With so many British manufacturing companies having died out over recent decades, I regard anything remaining remotely British today as being quite unique.

The history of the  Coate’s company

Coate’s started business as brush-makers in London 1847. Production continued following a move in 1875 to two locations; to Axminster in Devon and to Chard in Somerset. The company amalgamated with shaving brush manufacturer A. Simpson & Co in 1990, another well branded English company and one of which we recommend and stock here at the Valet. The Simpson shaving brush brand was sold off in 2008 and in 2010, as a separate company once again, Coate’s has relocated to Hungerford, Berkshire where the name remains synonymous with men’s high quality shaving and grooming products.

The company claims approximately ‘one hundred great shaves’ from a 165ml pot and trust me, I don’t think I will be far off the mark by the time I have finished mine. I am already a month in and have hardly made a dent in the pot!

Coate’s shaving cream is available at the Valet London

Coate’s shaving cream can be purchased at the Valet Male London store for £13.50 and as with all our shaving creams we recommend you use the Proraso pre and post cream which should be applied to your face before lathering with Coate’s shaving cream begins. This will not only act as a great undercoat to nourish the skin, but it will also provide a great richness of lather when used in conjunction with a good quality shaving cream, such as Coate’s. Pots of pre post menthol and the aloe and green tea version can be purchased in store at The Valet London.

Be kind to your face and pocket and start shaving with products that you will get enjoyment from, benefit your skin condition and be more cost effective in the long run. But with the most important of all, respect your face!